Haddon Hall usually opens in April‚ but this year it has been closed due to filming since February.  We are delighted that they will be opening daily from 20th June until the end of September‚ with October half term events and Christmas opening dates to be confirmed later in the year.  Adult tickets are £23.90 and Concessions (over 60) £21.90‚ but guests at The Old Station House can get 15% off the ticket price as we have vouchers issued by the hall specifically for us.

Haddon Hall is steeped in 900 years of history and has been described as “The most perfect house to survive from the Middle Ages.”  Just 2 miles from The Old Station House B&B!! 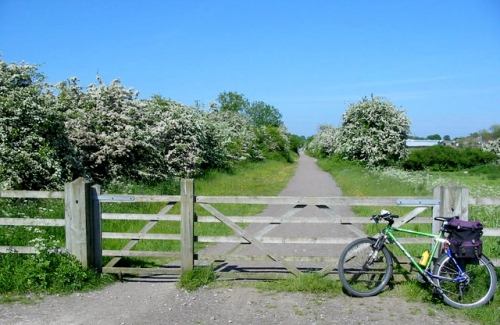 We are particularly blessed with traffic-free cycle trails in the Peak District‚ perfect for easy‚ off-road recreational cycling.  Here are some of the best‚ all easily accessible from The Old Station House:

1) Rowsley to Matlock (5 miles) – This path starts just around the corner from The Old Station House and takes cyclists on a straight flat path‚ adjacent to the Peak Rail heritage railway.

2) The Monsal Trail (8.5 miles) – This trail runs from Topley Pike‚ 3 miles south of Buxton to Coombs Viaduct‚ just south of Bakewell along the now defunct railway line and includes the famous Monsal Viaduct and several long tunnels.  Bikes can be hired at Hassop Station.  For those who are feeling energetic a new cycle path has been installed at the top of Church Lane in Rowsley‚ which can be used to link up with the Monsal Trail‚ for those who do not mind starting their journey with an uphill climb!

3) The Tissington Trail (13 miles) – This trail runs from Ashbourne to Parsley Hall and takes in some lovely views of the White Peak along the way as well as the picturesque village of Tissington.  The trail also links up with the next cycle trail on the list for those who want a really long route and ycle hire is available at both ends of the linear trail‚ at Parsley Hay and Ashbourne:

4) The High Peak Trail (17.5 miles) – From High Peak Junction near Cromford to Dowlow‚ 6 miles south of Buxton this trail passes by some important industrial history locations including the Derwent Valley Mills World Heritage Site at Cromford and the Cromford Canal.  Bikes can be hired at Middleton Top

5) Carsington Water (3 miles or 8 miles) – Cycle around this picturesque reservoir with some far-reaching views and stopping at the Carsington Water Visitor and Watersports Centre where bikes can be hired.

6) The Three Reservoirs Cycle Trail (18 miles) – Taking in Ladybower‚ Derwent and Howden reservoirs this trail is suitable as a family cycle-route or for the more energetic riders out there‚ this impressive location has something for everyone.  Bikes can be hired at Fairholmes car park.

To help our guests enjoy these trails we have installed secure bicycle storage in the car park at The Old Station House for those who want to bring their bicycles with them.